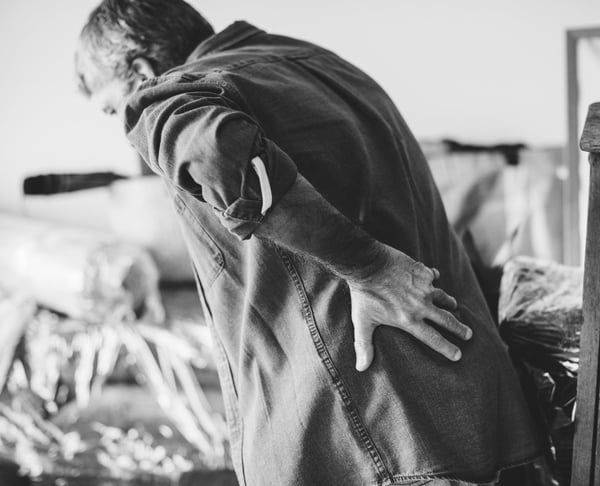 The yield curve is nothing more than a graph of bond yields by maturity, from the shortest to the longest, at a moment in time. Typically it plots the yields of the bills, (which mature in 90-days to a year) followed by the notes (which mature in two, five or 10 years), and ends with the 30-year bond’s yield. A normal yield curve like will have an upward slope: the longer the maturity of the instrument, the higher its yield. There are a number of reasons why this relationship exists, but basically, buying a bond entails risk, and the longer the maturity of the bond, the more risk entailed. So longer-maturity bonds pay higher yields to entice investors to take that risk.

A normal curve with the two-year offering lower yields than the 10-year is fundamental to how banks make money. Banks borrow short term at lower interest rates so that they can make long-term loans to borrowers at higher interest rates. The difference between those two interest rates, the positive spread, is their profit.

The yield curve started 2018 somewhat flat, and as can be seen below, short-term rates have risen at a greater pace than long-term rates, causing the yield curve to appear more flat (see below). 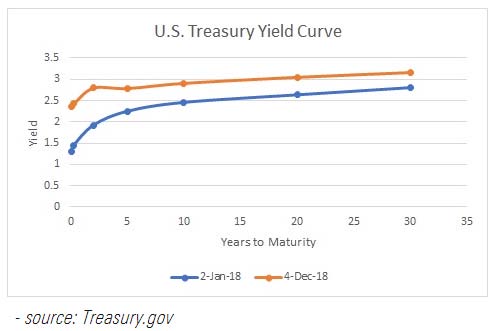 In this environment, banks would lose money for making certain types of loans. The less feasible and profitable it is for banks to make loans, the more they cut back on offering loans, therefore choking off access to credit markets that businesses need to grow. This in turn makes it harder for businesses to borrow; many companies cancel or delay projects and hiring. Weaker businesses will then go out of business if they lose access to the credit needed to keep operations going, which can then cause layoffs. Typically it takes about a year (sometimes longer), for the U.S. economy to fall into a recession after the 2-year and 10-year yields invert. The graph below charts the spread between 2-year and 10-year treasuries over time, with recessions marked by the shaded areas. The last seven out of seven times the yield curve went negative since the 1960s, a recession has followed.

It is important to remember (and can be seen above), the yield curve can flatten for years without tipping into inversion. Further, comparisons to past cycles may not be all that relevant as we are in a unique market environment in the wake of the historic zero interest-rate policy.

3 steps that could stop the inversion

With the major risk of the inversion, what could stop the 2-year and 10-year yields from flipping?

Fed Chairman Jerome Powell gave some hope to investors on November 28th that the Fed would stop (or are close to stopping) raising interest rates by saying rates are close to a range of neutral estimates. Jeff Gundlach of DoubleLine said the inversion of the 2-year and 5-year treasury yields makes it clear that the amount of rate hikes remaining will be fewer than the market initially thought.

President Trump and former Dallas Fed Vice President Jerry O’Driscoll have been critical of the Fed raising rates, seeing it as aggressive in the wake of the flattening yield curve and strong dollar.

2. Investors could flood market with long-term Treasuries from their portfolios.

Bond prices and yields have an inverse relationship. If investors were to flood the market with sell orders of their longer-term rates, the increased supply would drop the price and increase yields.

3. The Fed could quickly unload Treasuries from its balance sheet.

By unloading its balance sheet of short-term treasuries, this would reduce the supply of short-term bonds raising their price and lowering the yield. This would be controversial, because once it happens; investors will lose faith in the Fed’s ability to stop doing it, which could potentially send long-term rates substantially higher. Plus, investor expectations that the Fed would go very slow in unwinding its massive balance sheet are such that it would take a massive hit to its credibility.

While looking for a yield curve inversion, and yield curve analysis, sound like technical indicators, it is just as important to be aware of for large institutions as it is for individual investors saving for retirement.

While timing the market is impossible, and it is entirely possible that you will experience multiple recessions over the course of ones lifetime, being aware of a potential bear market (combined with how many working years) can be important for asset allocation.

The inversion shouldn’t be used as a retirement planning tool, it is about being prepared for “what-if” scenarios and if an individual has the risk tolerance and years left to ride out a bear market. Having to take withdrawals in a bear market can adversely affect ones portfolio.

What a recession means for retirees (sequence risk)

The sequence of returns in a retiree’s portfolio when they start taking withdrawal is important to the size and for how long one will be able to keep making withdrawals. This risk of having to take withdrawals from your underlying investment during a down market is call sequence risk. Negative returns combined with withdrawals can seriously impact how long a retiree is able to stretch their money.

Ideally, retirees will have planned to have enough sustainable income for at least a 30-year period, but nothing is guaranteed and even a well thought out plan can be disrupted by a bear market. In general, if retirees limit their initial withdrawals to 4% of their investment portfolios – and then increase that amount by 3% a year for inflation – they should stand an almost 90% chance of being able to sustain that income stream over 30 years without running out of money, according to a T. Rowe Price internal Monte Carlo program using thousands of potential market simulations. 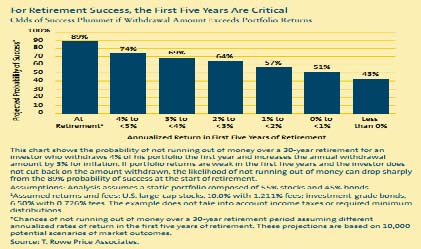 While experiencing negative returns is never desirable, getting through the first five years of retirement is the most critical (See above). Experiencing poor to negative decreases the likelihood that money outlives the retiree. “The reason for this is simple: Any money that retirees take out of their portfolios or that they lose in market declines in the first five years of retirement has a higher cost because its money that won’t be invested to earn returns in succeeding year when the markets recover,” says James Tzitzouris, Jr., investment analyst on T. Rowe Price’s asset allocation team. “And the less they have invested after a bear market, the less potential they have to benefit from the compounding of any earnings in subsequent years.

If you are concerned about or find yourself in a bear market during the first years of retirement, it might be important to consider cutting withdrawals or working part-time during the first few years. Other less drastic options might include keeping your withdrawal percentage steady instead of increasing it year-to-year, or beginning retirement with an ultra-conservative portfolio and gradually increase your equity allocation over five years until the majority of risk has passed.

Wall Street has started to acknowledge there is a good chance this bull market doesn’t continue through 2019. Goldman Sachs said recently that it expects cash to be the best-performing asset next year and it expects low returns for almost all asset classes. Remember, that when markets take a downturn, it is generally very quickly. Don’t just rebalance based on position gains relative to one another, but according to age and needs. The key to survival for retirement assets will always be preparing for the worst case scenario. Cash flow projections and a proper asset allocation will help prepare retirees so their assets and income stream can survive through a bear market and a 30+ year retirement. It might be prudent to speak with a Financial Advisor that can address your specific needs and find a customized solution to help you meet your goals and plan for many different scenarios.