Sequence risk, (sequence-of-returns risk) is defined as the risk of receiving lower or negative returns early in a period when withdrawals are made from an individual's underlying investments. These negative returns combined with withdrawals can seriously impact how long a retiree is able to stretch their money. It is important to understand these risks as it can help with important decisions such as when to retire, or if it is a good idea to keep working for a few years into retirement to decrease the chance of money running out before retirement has ended.

Sequence of return risk is also important in deciding what withdrawal rate is appropriate during retirement. It explores the idea that even if two different portfolios that are experiencing withdrawals average the same returns over the long-term, one of the portfolios could run out of money much sooner if it experiences more negative returns earlier on than its counterpart. One of the reasons is that instead of having compounding returns, by experiencing losses and withdrawing, it is causing the portfolio to experience compounding losses.

From a numbers standpoint, it does not make a difference if the bad returns come first or later on, as long as there are no withdrawals from or deposits out of the portfolio. As an example let’s look at a portfolio with $100,000 that has returns of -25% and 50% over two years while a second portfolio of the same size over the same time period experiences returns of 50% and -25%. Despite one portfolio experiencing an early good return followed by a bad one, and vice versa, they both end with the same value of $112,500 and average the same returns (arithmetic average for the returns are 12.5% while the geometric average is around 6.1%). So what kind of impact does the order of returns have when you add withdrawals into the equation?

For illustrative purposes only, not indicative of any specific

The results for the three scenarios are as follows: 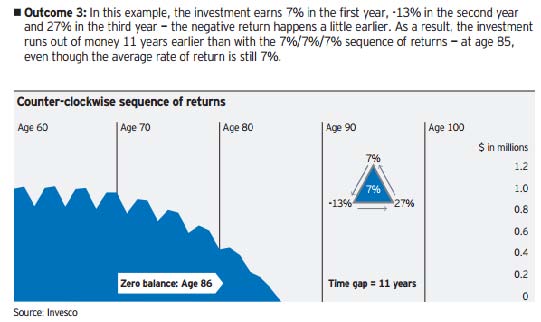 Ideally, retirees will have planned to have enough sustainable income for at least a 30-year period, but nothing is guaranteed and even a well thought out plan can be disrupted by a bear market. “In general, if retirees limit their initial withdrawals to 4% of their investment portfolios—and then increase that amount by 3% a year for inflation—they should

stand an almost 90% chance of being able to sustain that income stream over 30 years without running out of money, according to a T. Rowe Price internal Monte Carlo program using thousands of potential market simulations”2. But what happens if retirees have bad timing and retire in the beginning stages of a bear market? 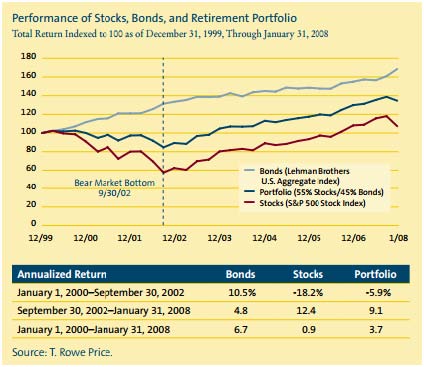 Reality is that bear markets can be detrimental to the long run success of a retiree’s portfolio if the proper precautions are not taken. While experiencing negative returns is never desirable, getting through the first five years of retirement are the most critical. Experiencing poor to negative returns decreases the likelihood that money outlives the retiree. “The reason for this is simple: Any money that retirees take out of their portfolios or that they lose in market declines in the first five years of retirement has a higher cost because it’s money that won’t be invested to earn returns in succeeding years when the markets recover,” says James Tzitzouris, Jr., investment analyst on T. Rowe Price’s asset allocation team, who conducted the simulation study. “And the less they have invested after a bear market, the less potential they have to benefit from the compounding of any earnings in subsequent years.”

It also might be critical to cut down on withdrawals if retirees have found themselves in a bear market early in retirement. While this is most likely the best option to ensure that they’re not going to outlive their money, this requires a lot of discipline and self-control; or it might not even be a realistic option for those retirees who are already living on the bare minimum. Another less drastic method would be to keep withdrawal amounts the same for a few years instead of increasing them year-to-year to account for inflation. Other protective measures include maintaining a really conservative portfolio with most assets in safer alternatives than stocks (like cash or treasuries), or even start with a small 20% allocation in stocks and gradually increase it over five years until the majority of the risk has passed, or work a few years into retirement to have an income stream to supplement cash needs.

The key for survival for retirement assets will always be preparing for the worst case scenario. Cash flow projections and a proper asset allocation will help prepare retirees so their assets and their income streams can survive through a bear market and continue to provide needed income all the way through their 30+ year retirement. On the off chance that retirees are caught in a bear market or a sideways market early in their retirement, they must re-evaluate their retirement plan and make decisions on how to protect and supplement current and future income streams.

The market is highly unpredictable and while some assumptions can be made with some confidence over the long-term, there are no guarantees that they will come true, and it is even more unpredictable in the short term. No one can predict with certainty when a bear market will occur or how long it will last. Therefore, investors should look to control what they can be protecting against risk and being conservative when approaching or entering retirement. “Starting with a conservative initial withdrawal amount and perhaps cutting back when encountering sustained periods of market decline can help mitigate the impact of such fluctuations on the retiree’s long-term financial success. It may also enable investors to increase withdrawals later as markets recover”.

The Retirement Group is not affiliated with nor endorsed by fidelity.com, netbenefits.fidelity.com, hewitt.com, resources.hewitt.com, access.att.com, ING Retirement, AT&T, Qwest, Chevron, Hughes, Northrop Grumman, Raytheon, ExxonMobil, Glaxosmithkline, Merck, Pfizer, Verizon, Bank of America, Alcatel-Lucent or by your employer. We are an independent financial advisory group that specializes in transition planning and lump sum distribution. Please call our office at 800-900-5867 if you have additional questions or need help in the retirement planning process.
The Retirement Group is a Registered Investment Advisor not affiliated with  FSC Securities and may be reached at  www.theretirementgroup.com .