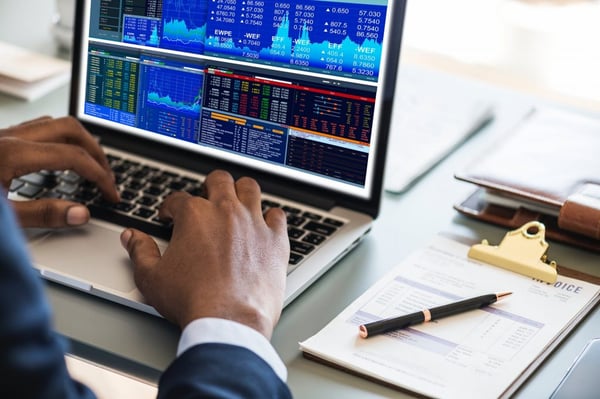 Investors continued to buy stocks, pushing values higher in October. Each of the benchmark indexes listed here posted solid monthly gains despite signs that the economy is slowing, both domestically and globally. Businesses remain hesitant to invest in nonresidential structures, equipment, and software, exports are lagging in volume, and prices remain subdued. Manufacturing continues to wane, and residential sales have been erratic at best. However, there may be headway in the negotiations between the United States and China, as the two economic giants try to resolve their ongoing trade war (although rhetoric from either side changes almost daily). The labor market continues to add new jobs, although wage inflation was muted last month. Since the beginning of the year, interest rates have been reduced by 75 basis points to their lowest levels since May 2018. The last day of the month saw the House of Representatives pass a resolution establishing a framework for a new phase of the impeachment inquiry.

By the close of trading on the last day of the month, each of the benchmark indexes listed here posted gains, led by the tech stocks of the Nasdaq, which climbed more than 3.50% from its September closing value. The large caps of the S&P 500 and the small caps of the Russell 2000 each gained over 2.0% by the end of October, while the Global Dow was close behind. The Dow advanced on the month, but by less than 0.50%. The yield on long-term bonds fluctuated during the month, ultimately closing October about where it began. 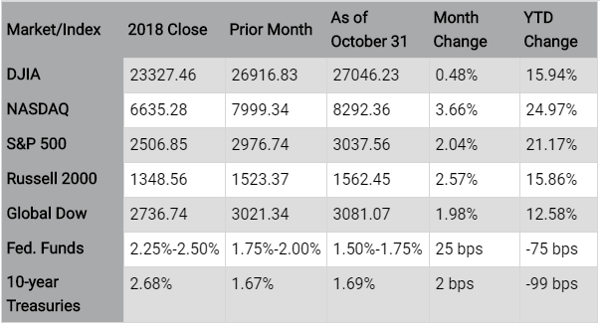 While stocks rebounded nicely last month, will that trend continue in November? Stock market growth seemingly rides on the progress made in the trade negotiations between the United States and China. With the impeachment process moving on to another phase and the government on target to shut down by the middle of November, it should be an interesting fourth quarter.