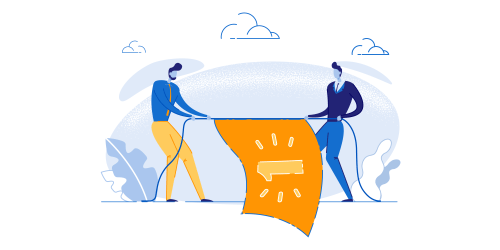 In July, the president issued an executive order intended to "combat excessive consolidation of industry, abuses of market power, and the harmful effects of monopoly." More than a dozen federal agencies were directed to begin working on 72 initiatives that seek to promote robust competition in the U.S. economy, in some cases through new regulations.[1]

The White House cites higher corporate markups, or the ability to charge prices above production costs, as evidence of companies' rising power in the marketplace. Economic research has found that the average markup has risen from 21% in 1980 to more than 54%, resulting in expansive profit gains for companies and diminishing financial benefits for consumers and workers.[3]

Critics say the order is too aggressive and that the regulatory policies stemming from it will likely face legal challenges from affected businesses.[4] Big tech companies dispute the notion that their conduct is anti-consumer, pointing out that they offer highly popular products and services, often at a lower cost and sometimes for free.[5]

The U.S. Chamber of Commerce responded by saying the executive order "is built on the flawed belief that our economy is overconcentrated.... Our economy needs both large and small businesses like Procter & Gamble to thrive — not centralized government dictates. In many industries, size and scale are important not only to compete, but also to justify massive levels of investment."[6]

Long-standing federal antitrust laws make it illegal to suppress competition unfairly or to enter agreements with competitors to fix prices, rig bids, or allocate customers. Mergers and acquisitions that are likely to increase prices for consumers are prohibited.

The Antitrust Division of the Department of Justice (DOJ) can conduct investigations and bring criminal or civil actions when it finds evidence of violations. The Federal Trade Commission (FTC) can bring civil enforcement actions.

Most proposed mergers and acquisitions over a certain size that affect U.S. commerce are reviewed by the DOJ and the FTC. Either agency can block deals that are expected to "substantially lessen competition."

What's in the Executive Order?

The sweeping directive calls on the DOJ and the FTC to enforce antitrust laws vigorously and address practices the White House describes as harmful to workers, such as asking the FTC to restrict the use of noncompete clauses and burdensome occupational licensing requirements that keep workers from changing jobs. It targets industries in which heavy market concentration is believed to be driving up prices.[7]

Technology. The White House announced a policy of greater scrutiny of mergers, especially for the dominant Internet platforms. The order encourages the FTC to (1) establish rules on surveillance and the collection of data, (2) counter anti-competitive practices that create disadvantages for small businesses operating in online marketplaces, and (3) issue rules against anti-competitive restrictions on repairs of devices (such as smartphones) by independent shops or the owners themselves.

Health care. The administration argues that a lack of competition among hospitals, drug makers, and other health-care companies such as United Healthcare is raising costs and limiting access to quality care. The order encourages the DOJ and the FTC to toughen guidelines for hospital mergers that could negatively impact patients, and directs the Food and Drug Administration (FDA) to help states work on importing prescription drugs from Canada. The Department of Health and Human Services (HHS) will have 45 days to devise a plan to combat high drug prices and price gouging, and 120 days to propose rules for allowing hearing aids to be sold over the counter.

Agriculture. The administration contends that farmers' and ranchers' share of each dollar spent on food has been declining while consumers are paying more, mostly because a few powerful conglomerates control most of the world's seeds, farming equipment, and meat processing plants. The order asks the U.S. Department of Agriculture (USDA) to develop a plan to help farmers access markets and receive a fair return, and to consider stricter rules for when meat can use the "Product of USA" label. The FTC was encouraged to prevent manufacturers from blocking repairs on farm equipment (such as tractors) by independent shops or the farmers themselves.

Transportation. According to the White House, the air travel, maritime shipping, and railroad industries are increasingly dominated by a few large companies. The order urges industry-specific regulators to (1) consider rules requiring airlines to clearly disclose extra fees and to refund said fees when bags are delayed or other services aren't provided, (2) require railroad track owners to provide right of way for passenger rail service and treat competitors that rely on their tracks fairly, and (3) help protect U.S. exporters from exorbitant fees charged by foreign shipping companies.

The order also pushes for the restoration of net neutrality — a standard that would require internet service providers to treat all content flowing through their networks equally — and covers additional issues that the administration blames on waning competition in the telecommunications and banking industries.

Existing antitrust laws have done little to stop consolidation in recent years, partly because regulators were narrowly focused on whether planned mergers would increase prices. However, Congress is considering at least six proposed bills that would modernize federal antitrust laws, one of which would increase merger costs and raise additional funds for antitrust agencies.[8]

Consolidation has helped large companies reduce costs through economies of scale and increase shareholder value, but with more intense scrutiny it may be harder to complete beneficial transactions. And if mergers are blocked — or companies are broken up — it could negatively impact corporate profits.
1–2, 7) White House Fact Sheet, July 9, 2021
3, 5) The Wall Street Journal, July 11, 2021
4) The Wall Street Journal, July 9, 2021
6) U.S. Chamber of Commerce, July 9, 2021
8) The New York Times, June 24, 2021