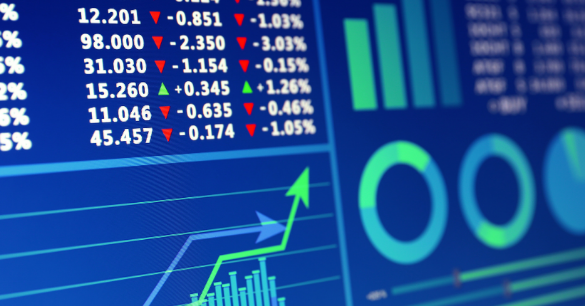 Before reviewing your company 401(k) plan, check out how the market can affect your retirement. Wall Street ended a very tepid month of September on a downswing. Each of the benchmark indexes listed here lost value last week, as investors continued to worry about the impact the Federal Reserve policies will have on the economy. The 0.3% increase in the August personal consumption expenditures price index certainly didn't help support the possibility of an easing of the aggressive rate-hike tightening employed by the Fed. While stock values dipped, long-term bond prices also declined last week. With prices waning, bond yields rose higher. The 10-year Treasury yield jumped 25 basis points last week. Crude oil prices edged up, while the dollar slipped lower. Gold prices rose about $20.00 per ounce.

Stocks extended their sell-offs last Monday, as central banks across the world ramped up efforts to curb inflation, which increased worries that their actions may create an economic recession. After falling 1.0%, the S&P 500 ended last Monday's session at its lowest level since December 2020. Treasury yields advanced, with the yield on 10-year Treasuries climbing 18 basis points to 3.87%, its highest level since April 2010. While the British pound dropped, the dollar climbed to yet another record high. Federal officials added to negative sentiment by indicating that additional tightening is needed to stem inflation, even if it means incurring job losses. In addition to the dip in the S&P 500, the Dow slid 1.1%, the Nasdaq fell 0.6%, the Russell 2000 lost 1.4%, and the Global Dow dropped 1.9%. Crude oil prices declined to $76.55 per barrel, their lowest levels since January.

Additional Articles You May Enjoy:

Wall Street closed last Tuesday with mixed results. The Nasdaq (0.3%) and the Russell 2000 (0.4%) edged higher, while the Dow (-0.4%), the S&P 500 (-0.2%), and the Global Dow (-0.4%) slid lower. Bond yields continued to climb higher, with 10-year Treasury yields adding 8.6 basis points to hit 3.96%. Crude oil prices rose 2.70% to $78.43 per barrel. The dollar was flat, while gold prices inched up 0.2%. Investors continued to hear Federal Reserve officials proffer their commitment to aggressively fight rising inflation. With Tuesday's losses, the S&P 500 fell for the sixth straight session, marking its longest losing streak since February 2020. Nevertheless, while traders are looking for the Fed to ease its stance, data continues to show that the economy may be able to withstand more tightening. Orders for core durable goods rose in August (see below), and consumer sentiment increased for a second consecutive month.

Unfortunately, the prior day's advance in stocks was probably a one-off, as Wall Street fell sharply last Thursday. With the latest gross domestic product showing the economy retracted for a second consecutive quarter, investors were again concerned that the Federal Reserve's aggressive fight against inflation may harm the economy. The Nasdaq slid 2.8%, followed by the Russell 2000, which lost 2.4%. The S&P 500 fell 2.1%, the Dow declined 1.5%, and the Global Dow dipped 0.9%. With Thursday's losses, the S&P 500 is on track for its poorest September since 2008. Ten-year Treasury yields rose 4.2 basis points to 3.74%. Crude oil prices fell $0.55 to $81.60 per barrel. The dollar inched lower while gold prices declined.

The employment figures for September are out this week. August saw over 300,000 new jobs added, while average hourly earnings rose 0.3% for the month and were up 5.2% since August 2021.

The Retirement Group is not affiliated with nor endorsed by your company. We are an independent financial advisory group that focuses on transition planning and lump sum distribution. Please call our office at 800-900-5867 if you have additional questions or need help in the retirement planning process.