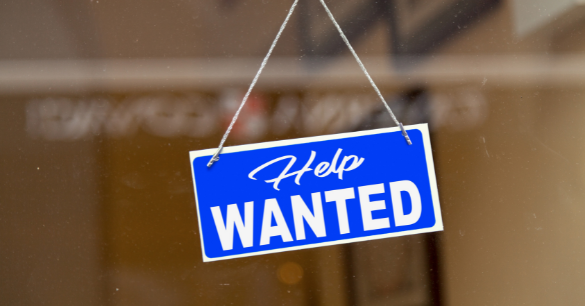 The headline U.S. unemployment rate fell from 6.7% at the end of December 2020 to 3.9% in December 2021, marking the biggest one-year improvement in history.1 While many workers, like those from Arizona for example took advantage of this strong rebound in the job market, companies large and small have been struggling with labor shortages.

A conspicuous lack of workers has snarled corporate supply chains; resulted in delayed and cancelled product orders; left working parents without access to child care; upended air travel; and forced restaurants, retail stores, and other businesses to shorten their hours or close understaffed locations. A recent spike in outbreaks from the Omicron variant worsened the situation.2

Since the pandemic began, unpredictable demand shifts have exposed pre-existing mismatches between the knowledge and skills of available workers and the tasks for which they are needed.3 But the sheer number of available jobs is also running well above the number of unemployed job seekers. Employers reported 10.6 million job openings on the last business day of November 2021, even though there were the 6.8 million unemployed persons in November and 6.3 million in December.4

COVID-19 may have kicked off a severe labor shortage, but longer-term demographic trends are partly to blame for this highly unusual job market.

A Workforce in Flux
At the onset of the pandemic, the labor force participation rate — the percentage of Americans age 16 and older who are working or actively looking for work — plummeted from 63.4% in February 2020 to a record low of 60.2% in April 2020. By December 2021, the rate had recovered only partially to 61.9%.5 About 2.3 million people have dropped out of the workforce entirely since the pandemic began.6 Some may have left temporarily, but others are probably gone for good.

Early retirements. The baby boom generation (born 1946–1964) is very large, and birthrates have declined in recent decades. The labor force has been aging and shrinking, and retirees' share of the U.S. population has been growing. Economists have long expected this wave of boomer retirements, some of which may have been accelerated by the pandemic. By one estimate, there were 2.4 million "excess retirements" due to COVID-19 (as of August 2021). Higher retirement account balances and home values made it feasible for some people to retire earlier than they would have otherwise.7

Immigration slowdown. It's estimated that declining immigration may have removed as many as 2 million potential workers from the current U.S. labor pool. Net migration to the United States has dropped steadily each year, from a peak of 1.05 million people in 2016 to 595,000 in 2019 and 247,000 in 2021. The most recent and drastic annual decline (July 2020 through June 2021) was due in part to travel restrictions associated with the pandemic.8

Pandemic repercussions. In December 2021, about 1.1 million people reported that the pandemic had prevented them from seeking work.9 This subset of missing workers includes those who still have child-care challenges or health concerns, including those who are contending with long-COVID symptoms.

On a positive note, pandemic relief measures helped many households strengthen their finances. Trillions of dollars in excess savings were accumulated thanks to stimulus payments, student loan pauses, and reduced spending while most people were stuck at home during 2020. This extra money gave many workers the breathing room to rethink their careers, and/or care for children or elderly parents, instead of working.

Economic Effects
A smorgasbord of open positions provides job seekers with more choices and more leverage. U.S. workers quit their jobs at record rates in 2021, in many cases to join new employers offering higher pay, lucrative benefits, better working conditions, or more flexibility, such as the option to work remotely.10

In fact, more intense competition for workers drove wages up 4.7% for the year ending in December 2021. Shortages have been more acute for lower-paying, in-person jobs, resulting in larger wage increases for workers in the leisure and hospitality, transportation and warehousing, and retail industries.11

Workers only benefit when wage gains outpace inflation, because it cuts into their buying power. And unfortunately, real wages, which are adjusted for inflation, dropped as prices spiked in 2021.

The Consumer Price Index (CPI) rose 7.0% in 2021 — the highest annual rate in nearly 40 years — as many businesses passed higher labor costs on to their customers.12 In December, the Federal Open Market Committee voted to speed up the tapering of the Fed's bond-buying program, setting the stage to begin raising interest rates more aggressively in response to persistent inflation.13 The dilemma for Fed officials is that they don't want to raise interest rates too fast and risk cooling the economy if labor shortages and other supply-chain issues will fade in time. But they must also be ready to act if it looks as though wage increases could fuel a dreaded wage-price inflationary spiral.

Labor shortages ranked as the number-one external factor that U.S. CEOs think will have the greatest impact on their businesses in 2022. Rising inflation followed closely in second place.14 The U.S. Chamber of Commerce has called on the federal government to reform and expand the legal immigration system so employers can fill jobs in labor-strapped industries, arguing that it could help cool inflation.15

In the coming months, some sidelined workers could be more motivated to seek employment when their savings are depleted or after their pandemic-related worries subside. Higher wages might also help draw some early retirees and stay-at-home parents back into the workforce.

However, labor force participation may never return to pre-pandemic levels, which means employers might need to change their hiring practices, reduce experience and education requirements, or provide training programs, opening the door to better-paying jobs for more workers. It's possible that automation technologies will also help fill the gap. Even so, it remains to be seen whether technology investments can boost productivity enough to offset a smaller workforce and maintain economic growth.

How Are Workers Preparing for Retirement

In general, workers seem to begin preparing for retirement almost as soon as they get their first job. However, according to the 2021 Retirement Confidence Survey by the Employee Benefit Research Institute (EBRI), retirement preparations do vary a bit by age group.

Retirement Preparations
Nearly three-quarters (72%) of workers say that they or their spouse have personally saved money for retirement. Not surprisingly, the older the respondents were, the more likely they were to report saving: